Hmong American farmers occupy a unique place in the history of Minnesota’s local foods movement. Since Hmong refugees began resettling from Laos and Thailand to Minnesota in the 1970s as political refugees after the Vietnam War, many families have relied on their agricultural heritage to make a living growing produce and flowers for local farmers markets.

By the late 1980s, Hmong farmers had revitalized the Saint Paul and Minneapolis Farmers Markets, transforming them into some of the most vibrant markets in the country, while also changing Minnesota’s taste buds. As hard working farmers, they provided the fresh produce that fueled the exponential growth of farmers markets into suburban communities and urban corridors, and greatly increased the supply of nutritious, affordable food.

Today, Hmong American farmers are leading the Twin Cities local food economy, making up more than 50% of all the farmers in metropolitan farmers markets. Hmong farmers are at the center of a Minnesota-based local foods economy that generates over $250 million in annual sales. Without Hmong farmers, this explosion of awareness and interest in local foods and small-scale farming in Minnesota would not be possible.

This event is part of the NEA Big Read in the St. Croix Valley. Join your St. Croix Valley neighbors in reading The Latehomecomer by Kao Kalia Yang. In June, we celebrate the arts with activities related to themes found in the book. Visit artreachstcroix.org/bigread for a complete list of events, registration, protocols, accessibility, and more. 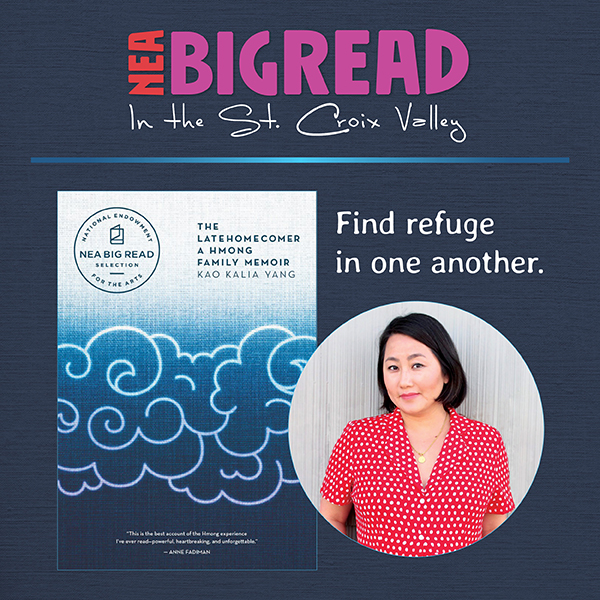 NEA Big Read is a program of the National Endowment for the Arts in partnership with Arts Midwest. Locally, the Big Read in the valley is presented by ArtReach St. Croix in conjunction with program partners including Valley Bookseller, Marine Mills Folk School, Twin Cities PBS (TPT), Stillwater Public Library and other library branches located between St. Croix Falls, WI and Hastings, MN.

To use this platform, the system writes one or more cookies in your browser. These cookies are not shared with any third parties. In addition, your IP address and browser information is stored in server logs and used to generate anonymized usage statistics. Your institution uses these statistics to gauge the use of library content, and the information is not shared with any third parties.